A Little (Reassuring??) Note from Sheree

Several months ago, we were faced with a decision. A hard decision. Allen’s scheduled trip to Liberia was suddenly fraught with life-threatening danger because of the Ebola epidemic. We were told we should cancel the trip. We thought seriously about canceling the trip! But the knowledge that people were dying without Christ left us with no peace in that thought. We truly believed that God was saying “Go!”.

However, it was not without opposition, and with the diagnosis of the case of Ebola in Texas this week, there has been a renewed interest in our health and the precautions we have taken to avoid carrying the disease to America. I have tried diligently to address concerns as they have arisen, but I am finding that it hasn’t been enough. So, in order to reassure you that we have taken every possible safety precaution as well as to provide you some entertainment (because I’ll just admit it, I’m a little over the top!), and hopefully to encourage your heart in the amazing ways that God worked, here are the top 10 ways that we have protected America from Ebola….

# 10. Allen took hospital-grade disinfecting tablets. These were used as an outreach to the communities but also to completely disinfect the CrossWay International Training Center where he stayed (literally, every day!  With a huge sprayer!). These tablets were hard to get. In fact, I found them online priced at nearly $600 for 540 of them. I nearly choked at the price, but after much more searching I found one other company that would sell them to me for $220. I made that purchase as quickly as I could over the weekend. The next Monday morning, I received a phone call from the company. I was sure they were going to tell me that they couldn’t sell me the tablets and I’d have to pay the $600! They even started the sentence out, “I’m sorry – we can’t sell you these tablets…” but then said “…for that price.” It seems that tablets were close enough to the expiration date (though not yet expired) that this small company didn’t feel right charging me full price. He said, “Would you mind if I only charged you $150?” When was the last time a company called you, after you had paid, wanting to charge you less? Yeah. Me too.

# 9. Allen took much but brought back little. Literally. Not even the clothes on his back. We packed his oldest (nice) clothes, and he left them there to be donated to those in the community. What did he wear on the trip back, you might ask? Well… this is where I got creative… okay, obsessive. I vacuum sealed his clothes for the trip home. Yep – those little machines that suck all the air out of the bag, you know – most people use them for food? I made an “outfit brick”, including shoes and a belt. It was a funny looking package, but no Liberian air ever entered that little brick! When he got off the plane from Liberia in Brussels, Belgium, he showered. Yes – showered, at the airport. The “outfit brick” had shampoo and soap included. He put on the clothes that had never been opened in Liberia and he sealed and disposed of the clothing he was wearing. He also wiped down everything he touched on the airplanes, before and after he was seated.

# 8. Anything that entered his mouth was new or sanitized. After deciding that even his toothbrush should be sealed, I set about to find disposable toothbrushes. They make these cool little pre-pasted ones that you use once and throw away, and they are all individually sealed. Perfect, I thought! Except that Payson doesn’t sell them and I didn’t think of them until too late to have them shipped. But one call to some friends took care of the problem. We received a text that very day asking where we wanted them to “make the toothbrush drop”. 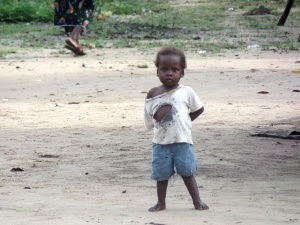 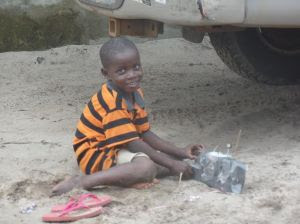 # 7. He didn’t touch anybody. Truly. Can you imagine??? Now this is where I give my husband HUGE bonus points. Seriously, look at these children? Are they not BEGGING to be hugged??? But in Liberia right now, there is a huge campaign to teach people not to touch one another, so everyone was strictly “hands off”. No handshakes. No hugs. Nothing. On the rare occasion that a child touched him, he immediately washed his hands. I look forward to the day that he can go back and give these children the hugs I want them to have!!

# 6. We purchased extra travel insurance that guaranteed his evacuation in the event that he got sick while in Liberia. He would have been flown directly to a hospital equipped for the containment of the disease.

# 5. When Allen arrived in Phoenix, we placed his small amount of luggage and electronics in plastic bags before putting them into the Suburban. When we got home, he showered again. The next morning I spent hours, HOURS, sanitizing every single item in every single bag. I wore gloves. I used the hospital-grade disinfectant on most items and concentrated alcohol on electronics. Did I mention HOURS? It took a while.

# 4. There were a few items that couldn’t be cleaned with bleach or alcohol, like his teaching notebook and the Liberian newspaper that had an article about (and picture of) my husband!!! I definitely wanted to see that, so I made him bring it home, but how to sanitize it was a problem. So I cooked it. In the oven. I know – I need serious help. But it worked. Well, the plastic on the notebook looked a little like a Shrinky-Dink gone bad, but the newspaper is fine. Did I mention that my husband is famous in Africa? Kinda…

# 3. I made an Ebola Symptoms sheet. It has a place for a check mark under any Ebola symptoms he might have for the next 21 days. So far he has zero. None. I am also recording his temperature twice daily.

# 2. We made arrangements with our doctor here in Payson for the 21 days following the trip. The doctor agreed to take our call on his cell phone, night or day, if Allen should feel ill for any reason, and triage him either via phone or Skype. He has an emergency plan in place to protect any other human being from being exposed IF Allen should have any symptoms. We have a great doctor! 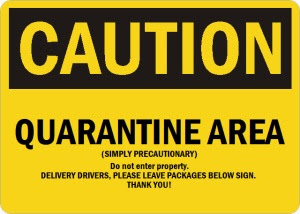 And the # 1 way we have taken precautions to guard others against this disease is to voluntarily subject ourselves to quarantine. Let me assure you that Allen feels FINE. I feel fine, and our children are all still healthy. The quarantine is to safeguard others and to let them know that we care and we are very serious about protecting them. Last week, I shopped for the entire month. In fact, I did EVERYTHING that required leaving the house for the entire month. I roped off our property (not as easy at it sounded!) and put up quarantine signs. I’ll be honest – we have sacrificed some things to do this, things we were really looking forward to doing and places we wanted to go. And when both our internet and coffee maker stopped working on day 1 of quarantine, we knew we were in for a LONG 3 weeks! Our kids have sacrificed as well! They cannot play with friends, go to youth group activities, or even go across the street! They are currently living with a sanitizing-crazed mother and a jet-lagged father, and they have no escape. Missionary kids deserve a lot of credit for the many “small” things that set them apart from other children! But when we look at what God did in Liberia, and the many people who trusted in Christ alone because of Allen’s trip, our perspective changes. These “sacrifices” aren’t even worthy to be called such in the face of who God is and what He has done. We are honored to have been chosen to carry the gospel of God’s grace around the world, and we pray that those around us can see the importance of the task, knowing that we have done all to protect the health of those around us while still following the call of God.

We still have 2 1/2 weeks of quarantine, and our internet can’t be fixed until it is over. We have only our smart phones, so blogging may be sparse in the next weeks, but the last day of October takes Allen to Kenya and Ethiopia, so be on the look-out for updates on those trips! We are SO looking forward to what God is going to do there and we are eager to share with you, our partners in ministry!

← Arrived safely in Phoenix!
Our Statement →

3 Comments on “A Little (Reassuring??) Note from Sheree”